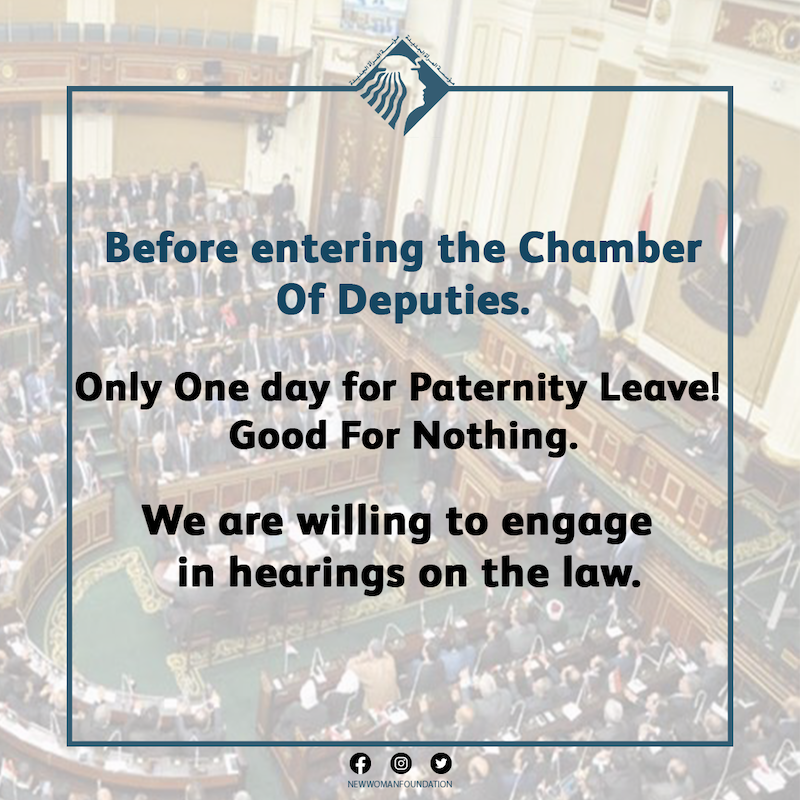 Last Saturday, the Egyptian Senate decided to grant a worker paternity leave of only one day in the event of having a new child after showing the birth certificate. Based on that, this item will be added to article 50 of the new draft labour code that is being discussed in the council’s energy, environment and labour force committee.

At first glance, the decision may seem to establish the principle of paternity leave, but realistically, it reflects only a weak symbolism that lacks the philosophy of “paternity leave”. Also, it fails to achieve its goal of involving men in the care of children, alleviating mothers in the postpartum period, and emphasizing that a caring role within the family is a shared responsibility of parents. In this context, definitely, one day off cannot support the concept of partnership between parents in childcare.

We believe that seven days for paternity leave is also not sufficient, but at least it reflects the minimum leaves that are now being applied in many states.

Paternity leave and other pillars that strengthen the basis of partnership in family care are available to fathers in about 80 countries, including the United Arab Emirates. As paternity paid leave is granted to working fathers for seven consecutive or separate days during the first six months of a child’s birth.

Moreover, some states, such as Finland and Norway, have adopted in their national legislation the system of unpaid parental leave for childcare in the application of ILO (International Labour Organization) recommendations 165 and 191. The recommendations of ILO stated the entitlement of the working parents of a child to care leave during the period following maternity leave. This legal intervention reflects a cultural and political change towards societal issues. Thus it supports women’s empowerment to participate effectively in all aspects of working life and makes them true development partners.

While today we are discussing the basic benefits of family justice and the protection of the best interests of the child, the signatory organizations and groups demand the chamber of deputies to review the decision on paternity leave and amend it to seven consecutive or separate days leave within the six months following the date of birth. Furthermore, we call for the proposals of women’s institutions—published through newspapers and websites during the past period—to be taken into consideration by the legislature. We also affirm our willingness to engage in hearings on the law and obtain the best formulas for ensuring gender equa