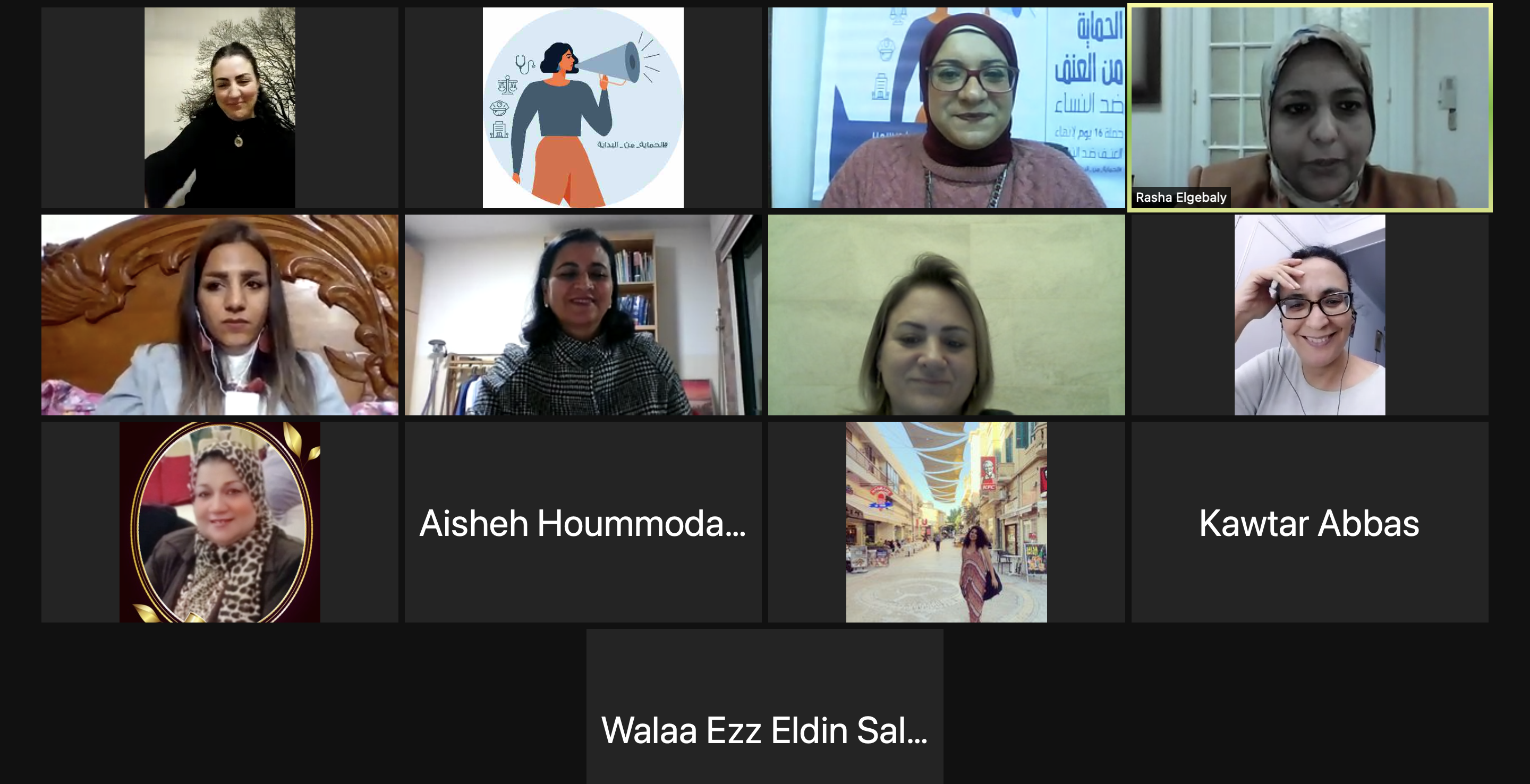 A Regional Arab Movement for Disseminating and Operationalizing Convention 190C

The New Women Foundation has organized a regional webinar on protection from violence in the workplace: towards a regional Arab movement for disseminating and operationalizing Convention no. 190C, on 4th December as part of “Protection from the Beginning” campaign events, within the framework of 16 days of activism against VAW, with the participation of several activists and human rights defenders from Iraq, Lebanon and Tunisia and Palestine.

The webinar was moderated by Mai Saleh, the gender and institutional support consultant at the New Woman Foundation; she pointed out the fact that for the first time the term “world of work” is used, not only the workplace but all workplaces and all individuals within the context of work. Article 10 of the convention went into detail regarding mechanisms of reporting and investigation, and protection of complainants and witnesses. Therefore, the Convention opens a new  more systemic and more reliable horizon in our national policies, which calls for national legislation amendments.

Human rights activist Kawthar Abbas from the Tunisian Association of Democratic Women highlighted the fact that the ILO’s convention is inclusive of all different groups, races, and ethnicities, and that the convention presented a gender approach to violence in the world of work, and that its importance lies in its concurrency with the pandemic.

Kawthar demonstrated a number of Tunisian laws that guarantee the rights of male and female employees, including the Tunisian labor law stipulating that pregnant women keep their work during their pregnancy. Kawthar also noted that Law 58 is considered a qualitative leap in the series of Tunisian laws because for the first time it addresses economic violence.

As for the shortcomings, they are evident in the injustice women continue to face in the workplace, where the disregards unpaid work for women, nor does it address forms of exclusion from resource distribution, or amending laws related to eliminating violence and harassment in the workplace, not to mention that it excludes agricultural workers.

Zahra Bazzi, Program Director in the Arab NGO Network for Development in Lebanon, demonstrated the law criminalizing sexual harassment in Lebanon, issued in 2020, and stated that for the first time a Lebanese law clearly criminalizes sexual harassment, and the law protects victims from retaliation by tampering with their salary, promotions, arbitrary transfer, or refusal to renew their contract. However, one of the law’s flaws is the lack of practical procedures to protect the victim when reporting, such as protecting them from losing their job, and there is no legal framework for seeking redress in civil courts.

Zahra touched on some recommendations directed to the private sector regarding eliminating violence and harassment against women, including commitment to gender equality and diversity in all fields of work, and protection of employees through policies and procedures, including reporting and grievance.

Zahra also had some inputs, including changing economic approaches, changing mindset and culture, power dynamics, and protecting victims through legal amendments and implementation of laws.

Rasha El-Gibali, head of the Union Committee for Real Estate Tax Workers in Alexandria, demonstrated the role of trade unions in improving working conditions. She also highlighted the need for holding symposiums for employees and union members on the convention, as well as the need for amending unions’ conduct code. This is in addition to developing mechanisms to monitor all violations against workers, and to develop forms of communication between unions, especially during the pandemic, as well as the importance of revisiting legislation in place and amending them to include definitions of violence and harassment in the workplace, and the importance of providing protection for complaints of violence from the authority of superiors.

From Palestine, Etidal Al-Jariri, an expert on participatory scrutiny issues towards gender equality, shared with us the GBV that Palestinian women are subject to and the violence imposed on them by the occupation. She said: “Palestinian women face levels of complex violence at the hands of occupation through a system of repressive measures whether by killing or by arrests at checkpoints and sometimes by arresting family members or confiscating agricultural lands in areas close to the border. Women lose agricultural lands, which forces them to work in Israeli settlements, where they are exploited by the broker who manages them, and they are further exploited while working in unfavorable and unsafe working conditions for long hours with low pay and no breaks, they have no protection whatsoever.”

Etidal pointed out that many women exposed to violence in the workplace remain silent, for which they cannot be blamed because there are no protection policies or measures in place that guarantee they would keep their jobs.

She added some recommendations; including activating the cybercrime unit, revisiting the Palestinian labor law, the necessity of establishing the national observatory to monitor cases of violence in the Ministry of Women’s Affairs, and the need for holding the occupation accountable for the violations that women working on farms are exposed to, with the importance of adopting a law to protect families from violence and procedures to expedite the disposition of cases.

From Iraq, Marwa Abdel Reda, lawyer and head of For Her for Women’s Issues Advocacy , gave her presentation on the latest Iraqi labor law for 2015, which for the first time clearly addresses sexual violence. However, this has not been reflected in the Iraqi reality, where harassment, sexual exploitation and inequality in wages are still rampant. This is in addition to forbidding women from working in the private sector. As a result, women’s unemployment rates are twice as high as those of men.

She said: “There are legal articles that encourage VAW, as in Article 41 of the Penal Code, which gives husbands the right to beat their wives and children for the purpose of discipline, and husbands or dependents can force the women to leave work or give them their wages.”

With regard to the private sector, Marwa explained that the Iraqi society does not benefit from corporate social responsibility, as the money goes to the government. She recommended that the situation needs to be monitored by private companies. She added that civil society organizations began demanding due CSR after the decline in the funding of international organizations to Iraq, and some companies are responding.

She also noted that the reports issued by Iraq are to embellish the state’s image before the international community, but they are empty formations, and that Iraq has suffered from corruption in every authority of the state since the end of the conflict.

In her closing speech, May Saleh, from the New Woman Foundation, indicated that national legislation needs to be revisited regarding women’s rights, as there is no point in amending one of the laws, labor law for instance, in the absence of a law against domestic violence.

Pressure must be applied to ratify some international conventions such as Convention 100 on Equal Pay and Convention 189 on the rights of male and female workers in the domestic sector.

Mai summarized some of the recommendations made during the participation and discussions, as follows:

She referred to the experience that began in Egypt, where the Ministry of Manpower established Gender Equality and Economic Empowerment Units, and the Distinction Shield Award was launched, which is presented to companies operating inside Egypt, applying policies of protection and equal opportunities for women and men in the workplace.

You can watch full webinar here