Reviving Task force against FGM, Why? 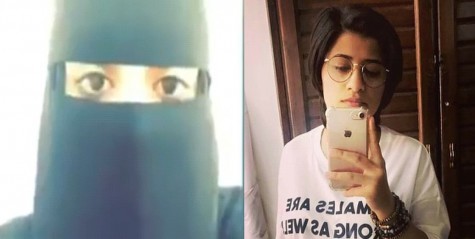 Woman human rights defender Noha Al-Balawi, who is active online in supporting civil and political rights for women, was arrested two weeks ago in the last week of January 2018. She is a college student from Tabuk. On 05 February her detention was extended for another month.

A Saudi source told the Gulf Centre for Human Rights (GCHR) that “Activists believe that we need to announce her case as her detention has been extended for another month, hinting that the case may take a serious course, which is expected considering the nature of her critical opinions and the state’s intolerance of any dissent.” It is difficult to obtain information on her detention as she has no legal representation, according to a close source.

Al-Balawi (pictured left) has been very vocal online, which can be dangerous in Saudi Arabia, where many online activists have been arrested, and human rights defenders are jailed for lengthy sentences.

In a YouTube video from 7 November 2017, she supported the driving campaign for women and solidarity with the prisoners of conscience in Saudi Arabia. (See in Arabic: https://www.youtube.com/watch?v=ouOPxJZqNeQ)

In a forthcoming submission to the Committee On The Elimination Of Discrimination Against Women (CEDAW) prepared by GCHR, FIDH and ALQST, the NGOs document that many woman have been arrested for expressing themselves critically online, whether in relation to the campaigns for women drivers (#Right2Drive) or against the guardianship system (#IAmMyOwnGuardian). Women human rights defenders are “condemned to silence,” says the submission. The CEDAW’s 69th session will take place from 19 February to 09 March 2018.

There have also been reports that two other Saudi women have been arrested, including another university student who advocates for women’s rights. Maria Naji (pictured right) was reportedly arrested when she returned to Saudi Arabia from Egypt, where she had been studying. Her friend was arrested with her.

According to this tweet, https://twitter.com/kenzoyy500/status/960208982513209350, “Maria Naji is a Saudi student studying in Egypt, advocating for women’s rights and believing in the Egyptian revolution she and her friend were arrested yesterday [03 February 2018] in an airport Jeddah.” The repercussions of this arrest cannot be immediately verified.

As part of Saudi Arabia’s development plan entitled Vision 2030 (which aims to free the country from its dependence on oil), the Kingdom has promised to increase women’s presence in the workforce, including by lifting some restrictions requiring a guardian in all aspects of their daily life, and by allowing them to drive (as of June 2018.) In its submission to CEDAW, Saudi Arabia claims they work in partnership with members of the civil society. Yet despite these announcements made last year, women are still being arrested for driving or discussing women’s rights.

GCHR calls on the Saudi authorities to follow through with promises to allow women more freedom in society including by:

GCHR respectfully reminds you that the United Nations Declaration on the Right and Responsibility of Individuals, Groups and Organs of Society to Promote and Protect Universally Recognized Human Rights and Fundamental Freedoms, adopted by consensus by the UN General Assembly on 9 December 1998, recognises the legitimacy of the activities of human rights defenders, their right to freedom of association and to carry out their activities without fear of reprisals. We would particularly draw your attention to Article 6 (b and c): “Everyone has the right, individually and in association with others: (b) As provided for in human rights and other applicable international instruments, freely to publish, impart or disseminate to others views, information and knowledge on all human rights and fundamental freedoms; (c) To study, discuss, form and hold opinions on the observance, both in law and in practice, of all human rights and fundamental freedoms and, through these and other appropriate means, to draw public attention to those matters”  and to Article 12 (2): “The State shall take all necessary measures to ensure the protection by the competent authorities of everyone, individually and in association with others, against any violence, threats, retaliation, de facto or de jure adverse discrimination, pressure or any other arbitrary action as a consequence of his or her legitimate exercise of the rights referred to in the present Declaration.”