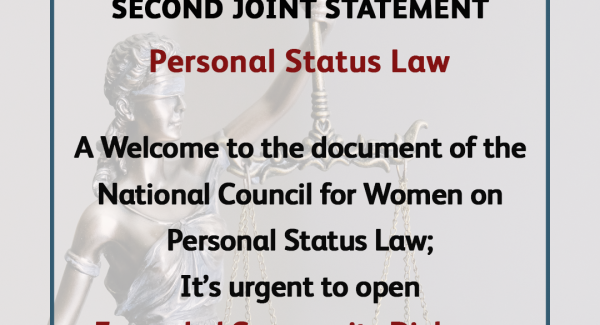 The Statement is open for signature submission.

A Welcome to the document of the National Council for Women on personal status law; it’s urgent to open expanded community dialogue.

On the official website of the National Council for Women, we have read the document “Determinants and Legislative Requirements for Amendments to Personal Status Laws”. We express our appreciation for the prompt and remarkable response of the national machinery in dealing with the current momentum on personal status law. We hope that successive interventions of the national machinery will always be frequent at the level of introducing policies and proposals.

The document “Determinants and Legislative Requirements for Amendments to Personal Status Laws” reflects the council’s interaction with the initiatives of the feminist movements. The document contains numerous theses and interventions in the draft personal status laws and other relevant drafts laws issued by civil society organizations.

The general framework of the document refers to six main points; the significant points are (the affirmation of the full-legal capacity of a woman, the protection of her rights and freedoms under the constitution, the preservation of her acquisitions, and the guarantee to obtain them). We propose to the general framework to add the personal status law based on the reference of binding international obligations and conventions on the rights of women and children. It is a constitutional obligation.

Regarding the problems and procedural aspects dealt with in the document, they were limited to predominant cases of women, while the National Council for Women document is supposed to reflect the interests of all Egyptian women without any discrimination. It is an inherent constitutional right of all citizens of both genders. This is prompting us to reaffirm the rule of law and the right to equality under the law for all without discrimination, as a major regulator to organize citizens’ relationships with each other with broad diversity and regulate everyone’s relationship with the state.

Tentatively, we highly value this document. However, it needs to open a dialogue about it and build a broad consensus that will promote priorities that cannot be regressed if the country witnesses a new personal status law. On the other hand, we emphasize the continuation of our movement towards a “civil law of personal status”. This will uphold the rule of the constitution and the law as a comprehensive reference for the citizenship of all Egyptians of both genders and uphold the rule of law in accordance with a harmonious constitution that organizes the relationship between citizens in the family.

We hope that the National Council for Women will undertake several community dialogue events on the document. Also, we hope that the dialogue table will bring together a broad spectrum of stakeholders in a new personal status law with significant participation. Consideration of the draft law is not limited to the Ministry of Justice, apart from the visions and discussions of the feminist movement and civil society organizations.

Signatures of institutions and individuals;

El Nadim Center For Management & Rehabilitation of victims of violence

The Forum for Women in Development

The National Front for Egyptian Women

Daughter of The Earth Association – Mansoura

Campaign for a Unified Civil Code of Personal Status

El Hak Foundation for Freedom of Expression and Human Rights

Sabiya Association for Woman and Child